Which is the Better Liquor: Vodka or Rum?

Throughout the centuries, there have been many age-old debates, such as “Which came first? The chicken or the egg” and “Pineapple on pizza: Yay or Nay?”, that continue to plague people and leave them unsatisfied when they arrive with no conclusions or agreeing to disagree. These kinds of questions have penetrated every available topic under the sun, and that includes alcoholic beverages.

Whether you’re a liquor expert, a bar regular, or a newbie in the world of alcohol, you’ve probably heard of different opinions about which alcoholic drink is better, vodka or rum. Today, we’ll try to answer this timeless question with our criteria and decide once and for all which one is truly the superior spirit, Vodka or Rum? Let’s find out.

Vodka is a clear alcoholic beverage commonly made by fermenting starchy grains like corn, wheat, and even potatoes. After the fermentation process, the liquid undergoes distillation, resulting in the beverage having a high alcohol content.

Manufacturers of vodka from the United States and some European countries also let the liquor go through filtration, making the final product have a neutral taste. On the contrary, countries that traditionally produce vodka only do minimal filtration on the spirit to retain its distinctive attributes and flavors.

The word Vodka comes from the Slavic word voda, which means water. It first appeared in Polish documents in the early 15th century as a cosmetic, medicine, and beverage. Contrary to popular belief and stereotypes, there is no official record stating that vodka came from Russia. According to historical records, it’s a toss-up between Poland, Sweden, and Russia about where it originated.

If you didn’t already know, there are only three types of vodka. These are plain, fruit or herbal, and flavored. Since vodka is distilled and simple, it doesn’t have the complexities of other alcoholic drinks, such as rums or whiskeys, making it limited in its nuances.

Plain or traditional vodka is the primary type of vodka that mainly consists of ethanol and water. These are the ones you usually see in stores and is the one commonly mixed in cocktails. The plain vodka is about forty percent alcohol, hence the burning sensation you feel, and the higher quality ones are some percent above regular.

The second type of vodka is fruit or herbal vodka. When the spirit undergoes a process called infusion, it results in the liquor having a tinge of color, a new aroma, and having a slightly fruity or herby flavor. This type of vodka takes longer to produce since the infusion process takes weeks to finish.

Lastly, we have flavored vodka. Although vodka is known to have that kick when consumed, it actually has no flavor; that is why adding different artificial flavors to it has become popular. Due to this, vodka has been leading in the flavored spirits trade.

There are also differences based on what the original product used for fermentation was. Potato vodka will taste distinct from grain vodka.

In fact, it should be surprising that one vodka tastes any different than the next; vodka regulations in the US require that vodka not have any distinct taste or flavor at all.

We all know that straight chilled vodka shots with no ice are the usual way to go. But let’s not forget about the myriad of drinks and cocktails you can gulp down when you mix this liquor with something else.

Similar to water, we find ourselves mixing and adding things to vodka because it has a neutral taste. Because of that, it has come to the point that we have more than fifty cocktails that use vodka as an ingredient. Examples of these are the vodka martini, the Kamikaze, the Gimlet, and the Bloody Mary.

Health Benefits and Other Uses

In the past, people considered vodka as a medicine and cosmetic. And, although science hasn’t progressed far enough in those times, those historical people might be on to something.

Like all alcohol, drinking vodka in moderation can reduce the risk of getting certain illnesses like heart diseases and strokes. What separates vodka from other alcoholic drinks is it has a low-calorie count, and it practically has no sugar and carbs in it, making it safe for people with diabetes.

Additionally, since it has a high alcohol content, vodka can be used, situationally, as an anti-septic. One can use this liquor to get rid of bad breath, as a stain remover, as a kitchen top and bathroom cleaner, astringent, and disinfectant in emergencies.

If you want to know what Vodkas are available at Fandoms Nerd Bar, we actually have several. Our vodka shelves are stocked with good quality Smirnoff, Titos, and Absolute, and we also have cheaper well vodka like Paramount. If you want to drink a nerdy drink made of vodka at Fandoms, you can get it!

Rum is the result when sugarcane molasses go through fermentation and distillation, then aged in oak barrels. The product of these processes is a transparent liquid with varying colors depending on how long it’s aged or if it underwent filtration.

Production of rum mostly takes place in the Caribbean and countries in North and South America. But, equally important, countries that produce vast quantities of sugar also create rum, specifically Taiwan, India, and the Philippines.

Rum’s history is colorful and worldwide. The earliest indication of a fermented and distilled sugarcane juice appeared in Sanskrit texts which date back to before the 7th century AD. Furthermore, there were records of stories in the early 14th century stating that the king of Cyprus gave rum as a gift to other monarchs.

But, the rise of rum in the west began when slaves in the Caribbean experimented with the byproduct of sugar production, molasses. They found out that it can become alcohol through fermentation and distilled it to create a concentrated liquor and remove impurities. After that, the rest is history.

Categorizing rum may prove to be complicated since it may involve many factors like which region it’s produced, age requirements, and spirit proof. So, we’ll use the most common way to classify rum. There are three groups in this classification: White, Gold, and Dark.

White rum has the mildest flavor among the three. It gets its water-like clarity from the filtration process and has forty percent alcohol by volume. Furthermore, this is the usual pick of bartenders to use as a base for mixing drinks.

Meanwhile, the Gold and Dark rums have a more vibrant and bold flavor profile because they are kept and aged in the oak barrels for longer periods. However, in exchange for the rich flavors, their alcohol by volume percentage decreases, with Gold rum having thirty-seven and Dark rum having thirty-eight.

Rum is a popular base liquor for many cocktails due to its sweet undertones. Because of that, more than forty cocktails have been born with its help. The well-known ones among these are the Mojito, the Daiquiri, The Piña Colada, and Between the Sheets.

Health Benefits and Other Uses

Who would’ve thought that alcoholic beverages can make you healthier? If you drink rum regularly in small amounts, you can reduce your stress levels, lower your blood sugar, ease muscle pains, and even treat the common cold.

Aside from its medicinal properties, rum can also add flavor and moisture to several dishes and baked goods. An example of that would be the rum cake. Moreover, if you’re looking for something savory, multiple chicken and meat recipes also use rum.

The spiced rum currently in the speedwell at Fandoms Nerd Bar is Admiral Nelsons rum. I personally think it has a very smooth, very clean flavor with a crisp and refreshing aftertaste. Note that our well rum is subject to change at any time.

Both liquors have given splendid points and put forth compelling facts for their case. The individual aspects of each spirit have provided us with its pros and cons. And with that knowledge and information handed to us, it is time for the final verdict.

It all comes down to preference. You’ll have to try both beverages to know which one tickles your taste buds. Heck, maybe both drinks aren’t to your liking. But, at the end of the day, what’s important is that you drink alcohol to get drunk and have fun on your own or with your friends. Just remember to drink moderately.

Blog Drinks Other
April 3, 2021
These are the top ten most popular cocktails, in my opinion.… 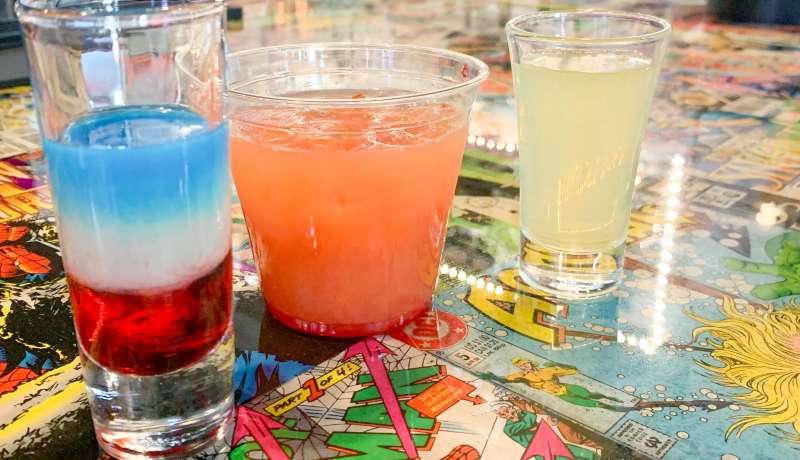